Options for a Broken Tooth at Our Nanaimo Clinic

To prevent further damage or the risk of infection, come see Dr. Petricca at Periodontal & Implant Clinic to fix a chipped, fractured or broken tooth in Nanaimo.

Some of the common causes of a tooth breaking include:

1. A Tooth Has a Large Existing Filling
What supports the filling is the rest of the tooth. At some point, the natural tooth portion is stressed and gives way, leaving a portion of the tooth remaining.

2. A Person Has a Significant Clenching and/or Grinding Habit
Clenching and grinding are common habits and can be associated with daytime or night-time stress. In severe cases, even a natural tooth with no filling of any kind can fracture.

A Broken Tooth: Can it Be Saved?

A) is the root length (in bone) long enough to undergo crown lengthening
B) if a post is placed into the tooth (posts can help support a filling), will the post present a risk for future fracturing of the root? 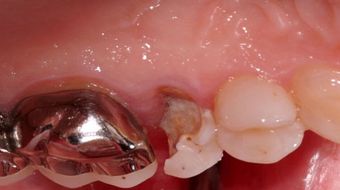 Above: Tooth is broken on the inside with only a thin layer of natural tooth on the cheek-side remaining and decay is also present 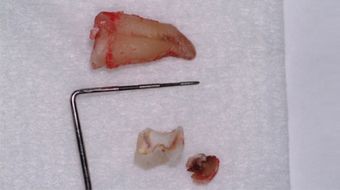 Above: We see a redline on the extracted tooth (the “biologic width” or gum attachment, 3mm below the gumline). 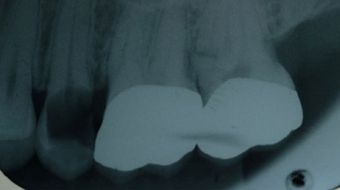 Above: This is an x-ray. To save this tooth we would need to do at least 4 mm of crown lengthening (trim away bone) in order to have at least 2mm of natural tooth above gum to support a crown. This would leave little root left in bone to support the tooth. In this case an implant may be a better replacement option.

Methods to Keep the Broken Tooth

Options to treat a broken tooth include, but are not limited to:

In this method, some of the gum around a tooth is cut away.

The "natural relationship" distances (also known as biologic width) between gum and bone around a tooth is constant. We generally have a 1 to 3mm pocket measured from the gumline to where the gum attaches to the root below the gumline, the attachment itself is 2mm, and then we reach the crest of bone. If the above measurements already exist, then simply cutting away gum without trimming away bone does not respect this "natural relationship."

A minor surgical procedure whereby some bone (millimeters) and soft tissue (gums) are trimmed around our tooth. This is done to both:

Purpose: increase amount of non-filled tooth proportion
(the portion which will “hold” a crown)

To orthodontically (braces or Invisalign®) pull the tooth through the surrounding bone and gum (millimeters; takes a few months) so that more tooth is available to support the desired crown.

The remainder of the broken tooth can be crowned as is if sufficient "natural" tooth structure remains (not filling per se) to hold/support a crown. This usually requires about 3 mm of natural tooth structure above the gumline for a front tooth and 4mm for a back tooth.

Note: putting a crown on a tooth that is largely just filling is like putting a filling on a filling. This risks the crown coming off easily in the short-term.

Sometimes one can gain more tooth structure by burying the crown margin deep under the gum. This unfortunately can encroach upon or even sever the natural fibers that connect the gums to your tooth attachment (also known as biologic width violation). The consequences of this can include chronic inflammation and bone loss (the bodies attempt to recreate room for the natural attachment).

Methods to keep the broken tooth as described are only feasible if the length of the root of your broken tooth is long enough to afford having supporting gum and bone trimmed around it (much like removing dirt or concrete around a post in the ground, there is a limit whereby support for the post is compromised and becomes loose). When the root of your natural broken tooth is not long enough to afford crown lengthening or extrusion, then the following are commonest options:

1. Replace the Tooth with an Implant (Considered the “Gold Standard”)

An implant can sometimes be placed immediately after a tooth is extracted.

2. Remove the Tooth and Replace it with a Bridge
This requires paring down (removing natural tooth structure) the teeth on either side of the missing tooth in order to crown them (a false tooth is joined to the crowns of the adjacent teeth), which is considered "subtractive dentistry." As well, the average lifespan of a bridge is about 15 years.

Before you decide to have your tooth extracted, it would be wise to consider socket preservation.

4. Placing a Larger Filling (Patching Up the Broken Tooth)

This is considered a short-term solution and does not necessarily provide strength or stability.